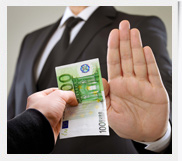 As the organizational unit of the Presidium of the Police Force the National Crime Agency was established on 1 December 2012. The reason for its creation laid in strengthening the performance of service activities in the area of detection and investigation of particularly serious and socially dangerous crimes, especially in the area of economic crime, financial criminality, particularly serious organized criminality, drug crime, corruption offenses and crimes of extremism and terrorism falling within the jurisdiction of the Specialized Criminal Court. The auspice for detecting and investigating corruption offenses under the conditions of the Slovak Republic is the National Crime Agency of the Presidium of the Police Force.

The National Crime Agency  of the Presidium of the Police Force performs its tasks in particular in the area of detection and investigation of offenses of bribery, indirect corruption, electoral corruption and corruption in sport under the third part of the eighth chapter of the special section of the Criminal Code, as well as related crimes committed by foreign public officials and other selected offenses, with the exception of corruption offences committed by members of the armed security forces and, with effect from 1 January 2020, criminal offenses of customs officers, which fall within the substantive jurisdiction of the Office of Inspection Service.